SALT LAKE CITY, UT — (09-30-22) — Same-Sex Marriage support in Utah strikes a new high coming in at 72%.  In a seismic shift, a new Deseret News/Hinckley Institute of Politics survey found 72% of residents agree that same-sex marriage should be recognized by the law with the same rights as traditional marriages. 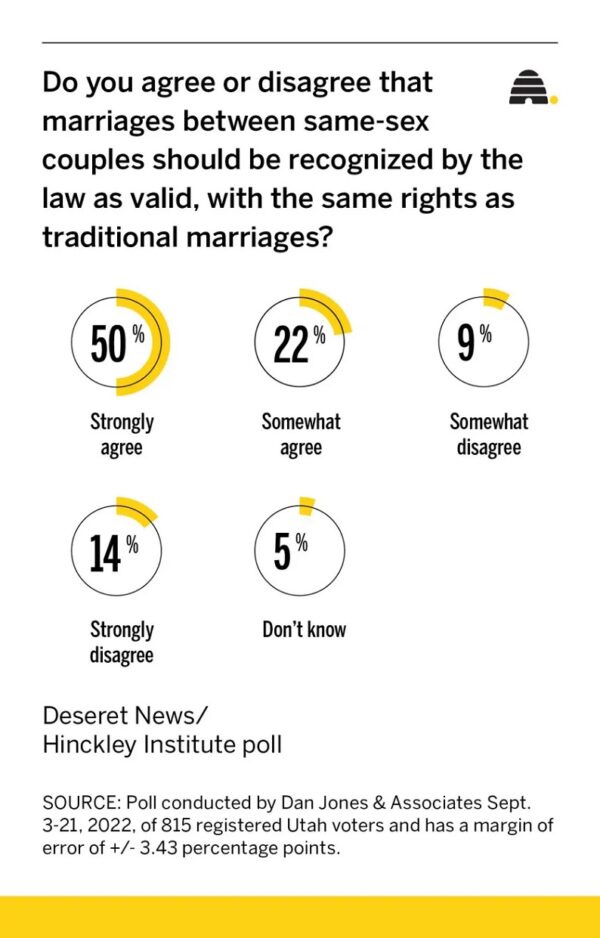 “For a state that less than 20 years ago passed laws and a constitutional amendment prohibiting same-sex marriage, there has been a seismic shift in opinion,” said Jason Perry, director of the Hinckley Institute of Politics at the University of Utah.

Utah recognized same-sex marriage in 2014, a year ahead of the U.S. Supreme Court decision making gay marriage law of the the land. However in 2014, less than half of Utah residents supported gay marraige.

“Now, it has majority support from nearly every group across the political, demographic and religious spectrum,” added Perry.

The Deseret News/Hinckley poll also shows that Utah voters are aligned with the nation as a whole on the subject of gay marriage as the Gallup poll taken in May 2022, found 71% of Americans supported making gay marriage legal, a new high according to Gallup.

Troy Williams, executive director of Equality Utah, told Deseret News…“Utah is a pro-family state, and we recognize that families come in all shapes and sizes. When we see loving, committed couples joining in matrimony, our natural impulse is to support and encourage that love. This gives me great hope for the future,” said Williams.

The executive Director of Equality Utah further added that he hopes Utah Republican Sens. Mike Lee and Mitt Romney will follow the example of their congressional colleagues in the House and vote pass the ‘Respect for Marriage Act’, “so that all Utah families will be protected by state and federal law.” said Williams.