One of the four transgenders who were in attendance was Rainé Eliza. She is the one who filmed the incident on her cellphone below.

Representative Buddy Carter who is well known for his anti-LGBTQ activism, recognized the activists at the campaign barbecue. After recognizing the transgender activists, Buddy Carter spoke jovially to them and asked them if they enjoyed the barbecue. Carter further said that he enjoyed having them there.

That’s when Rainé Eliza asked Carter how he felt about transgender citizens. Carter responded by saying that he had no comment and then walked away.

Following that brief conversation between Raine Eliza and Buddy Carter, a state trooper walked up on them to escort the transgender activists off the premises or they would face arrest for trespassing.

This is ironic considering that all four transgender activists were registered for teh public event.

If that wasn’t bad enough, a man wearing a ‘Gays for Trump” shirt said to the transgender activists who were chanting on their way out “”You cannot erase trans people!”, said that “I’d Love to though”. Yes, the man wearing the “Gays for Trump’ shirt said it. 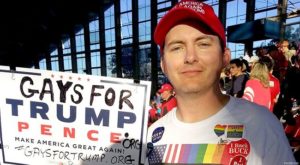