He not only insulted transgender Americans who put their lives on the line for us 365 days a year, but he also went into their health care costs that are currently the hot button being used by president Trump to advocate for kicking Transgender Americans out of the armed forces.

Study after study have shown that once transgender personnel enlist in the armed services, they do not go through with the surgery henceforth, there are no outrageous health care costs that would be detriment to our national security.

“As long as there are troops and veterans out there who are not getting the care that they should … I couldn’t care less about transgender people getting an elective surgery,” Peter Boykin told the Daily Beast. “People already have enough problems with PTSD, I don’t think it’s a good idea to give someone going through that type of change a weapon. They might snap and turn it on their fellow soldiers.” Boykin told the Daily Beast.

Boykin went on to defend Trump’s anti-Transgender policy by telling the Daily Beast…“He is not against the gays at all. He is for all Americans and protecting all Americans. Donald Trump has always been pro-LGBT. He owned pageants, hotels, he works with gay people.” said Boykin.

The chances of Boykin unseating incumbent Democrat Amos Quick is highly unlikely considering the 58th District is not only heavily progressive but also has a large LGBT population. Currently Boykin seems to be blowing smoke about running for office as Ballotpedia currently shows state representative, Democrat Amos Quick, has only one opponent this year in the Democratic primary, Katelyn Flippen and according to Ballotpedia. Boykin currently has no opponent in the Republican primary which is scheduled to take place on May 8. Chances are, the RNC is not wasting any time on the district considering its heavy Democratic population.

Now here is the funny thing out of all this, neither the Log Cabin Republicans or any representative from the Guilford County Republican Party had any comment on Boykin’s controversial comments. 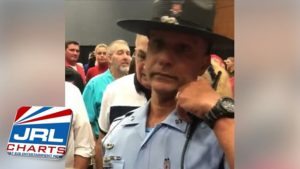