Governor Tom Wolf (D) of Pennsylvania has made history creating the first ever LGBTQ Commission on LGBTQ Affairs through an executive order he signed on Monday.

The first of its kind in the United States, the LGBTQ Commission will be headed by executive director Todd Snovel, of Lebanon Valley College, where he teaches courses on gender and sexuality.

Pennsylvania has never had protections against LGBTQ discrimination especially in the areas mentioned above as well as for LGBTQ adoptive parents. Not to mention their continued discrimination for obtaining credit and lending for LGBTQ families and business owners. 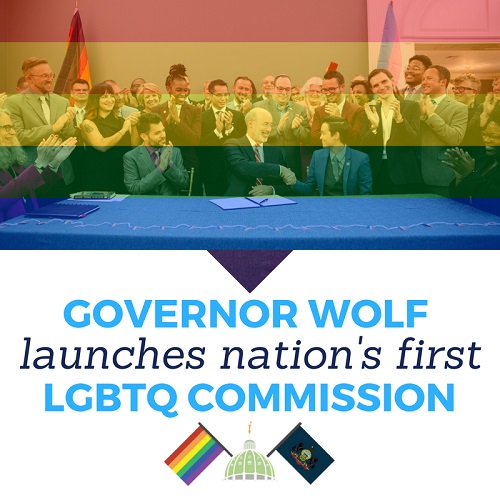 One thing the LGBTQ Commission will put a lot of effort into is establishing Hate Crime Legislation with is alien to the state of Pennsylvania as it has no protections for LGBTQ citizens. In fact the state of Pennsylvania describes a Hate Crime as a criminal act motivated by ill will or hatred towards a victim’s race, color, religion or national origin only and not LGBTQ.

Governor Tom Wolf said in a press release on his signing the executive order….“The creation of the commission on LGBTQ Affairs is one step of many we have taken to ensure obstacles are removed for anyone who is facing an unfair disadvantage based on sexual orientation, gender identity and expression. It’s a step we took together with our stakeholder and advocacy groups and one that those involved asked for — a commission to help coordinate and drive statewide equality efforts. When I became governor, we saw that change was needed and we made it happen, Better yet, we are still making it happen and will do so until every Pennsylvanian can live, work, love, and thrive in our state with an assuredness of support and safety.” said Wolf.

Govenor Tom Wolf’s office has released a list of the members of the new LGBTQ Commission. Review  Here.