LAS VEGAS — (05-20-22) — The Walt Disney Co. have launched an LGBTQ-themed apparel and accessories line called the “Disney Pride Collection”, and will donate all profits through June 30 to groups that support “LGBTQIA+ youth and families.”

Among the charities Disney will donate profits to include, the Los Angeles LGBT Center, LGBTQ Center Orange County, and the San Francisco LGBT Center. Other groups receiving money are The Trevor Project and the Ali Forney Center, both of which are designed to help gay youth. 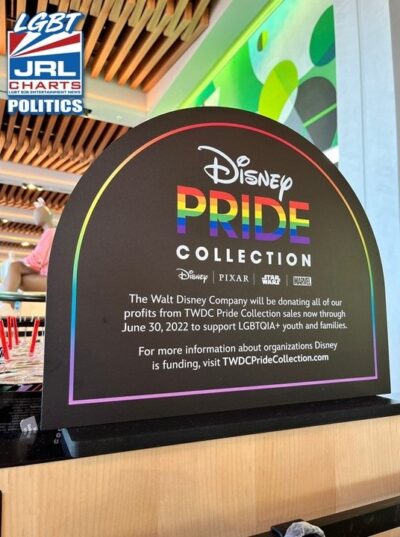 As Florida’s Republican Party continue its war on the LGBTQ community with its Parental Rights in Education law aka “Don’t Say Gay“, the Walt Disney Co. strikes back with its launch of an LGBTQ-themed apparel and accessories line.

The LGBTQ merchandise, which is geared for both children and adults, features rainbow-themed motifs imposed on familiar Disney brands, including Star Wars, Marvel, and Pixar. Some of Disney’s LGBTQ Clothing Line feature slogans “Belong, Believe, Be Proud.”

With the release of the Disney Pride Collection, The Walt Disney Company announced that all profits made from this collection’s sales will be donated to support LGBTQIA+ youth and families 🌈 pic.twitter.com/bf3ku2qvCP

Disney told JRL CHARTS LGBT Politics that the new line was created by “LGBTQIA+ employees and allies” and represents “their incredible contributions and place at the heart of the company. We stand in solidarity with our LGBTQIA+ community everywhere,” said Disney’ spokesperson.

The Disney Pride Collection, which is being sold online as well as at Disney parks and other retailers nationwide, is actually a rebranding of Disney’s LGBTQIA+ rainbow-themed apparel that it has been on sale at Disney locations since 2018.

Statement from The Walt Disney Company on signing of Florida legislation: pic.twitter.com/UVI7Ko3aKS

In response to Disney’s attack, Florida Gov. Ron DeSantis (R) has revoked Disney World’s special self-governing status in Orlando, potentially exposing the company to mountains of new regulations and taxes. However legal scholars say that DeSantis’ attack on Disney will not hold up in court.