TEXARKANA, TX — According to the Miller County Sheriff’s Office, an arrest has been made in the armed robbery that took place back in May 2017 at the Venus Adult Boutique located at 6780 State Hwy 108.

The suspect identified by police as 27 year-old Travon Mandel Peoples is awaiting extradition to Miller County, according to a press release from MCSO spokesman Les Moody.

According to police, on May 22, 2017, two masked, armed gunmen entered the popular Venus Adult Boutique known commonly as Venus Texarkana located at 6780 Arkansas Highway 108 – “brandishing their weapons and demanded money,” said Moody. The two suspects left with an undisclosed amount of cash.

Once MCSO investigators were able to review the surveillance video for descriptions of the suspects, deputies were able to learn the make and model of the getaway car as well as being able to retrieve a partial license plate number of the vehicle.

“During this three-month investigation, numerous items of evidence were collected and sent to the Arkansas State Crime Lab for analysis.” said Moody. “The investigation has led to the identification of one of the suspects,” said Moody.

According to the Miller County Sheriff’s office, the investigation is ongoing, and additional warrants are forthcoming. 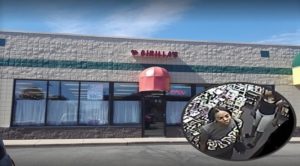