A group of men and women who claim to be people who use to identify as as gay, lesbian and transgender, descended on the US capital on Wednesday to lobby against LGBTQ rights.

The group is made up of 15 members, who are part of Church United and an organization called “Changed”. The two California-based organizations provide a community for “formers” or people who formerly identified as being a part of the LGBTQ community.

Elizabeth Woning, co-founder of Changed, said the group wants to “share our experiences and bring awareness to the fact that we exist.”

“Sexual behavior should not be a protected right,” said Jim Domen the founder of Church United. “The Equality Act treats sexual preference as an elevated class and would strip people of religious freedom.” said Domen.

The “formers” are lobbying against H.R. 5, the Equality Act and H.R. 3570, the Therapeutic Fraud Prevention Act, which are both supported by every major LGBTQ advocacy organization in the US.

However with Majority Leader of the US Senate Mitch McConnell in charge, the likelihood of both bill passing are slim to none.

The Therapeutic Fraud Prevention Act would make conversion therapy, the practice of trying to change a person’s sexual orientation or gender identity, a fraudulent practice if exchanged with monetary compensation.

At least the the 15 member received their 15 minutes of fame, its just too bad no one is buying their nonsense. 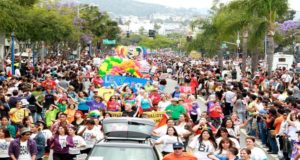