Synopsis:
“Riley Finch is rinsing a fun filled, sunny day at the beach off in the shower when Levi Rhodes walks in. The pair share an understanding about always doing what feels good; and, nothing would feel better than their naked, wet bodies rubbing against each other.

Levi strips down and hops in. The two twinks intertwine with passionate, wet kisses; and, soon enough, Riley is bobbing up and down on Levi’s extra long dong. After getting his cock swallowed, Rhodes orders the tiny twink to stand up.

He spins him around, pushes Riley against the stall wall, then buries his face in that incredible ass. Finch turns to himself on Levi’s lips, then begs him to stop teasing his hole. Happy to oblige, Rhodes rams his raging rig in the boy’s back door. Finch moans in ecstasy as his hard cock bounces in time to his top’s thick dicked thrusts. He grabs his ample appendage, strokes it a bit, then suggests they take this tryst to the bedroom.

Riley lays back on the bed. Levi takes the hint, and shoves the twink’s tall tally whacker towards his tonsils. But, our boy wants more than just a taste; so, he climbs up on that cock and takes Riley’s raging rod for a ride.” 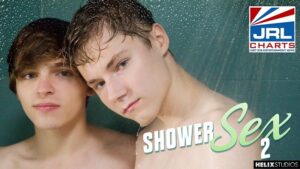