SANTA MONICA, CA — (09-04-20) — Get ready to laugh your ass off as The Boys In The Band Gay Comedy Trailer drops starring Jim Parsons, Zachary Quinto and Matt Bomer.

The Boys in the Band is the upcoming American comedy drama film directed by Joe Mantello and based on the 1968 play of the same name by Mart Crowley, who also wrote the screenplay.

Netflix tapped director Ryan Murphy to adapt the play into a movie for Netflix as part of his $300 million deal with the streaming giant. 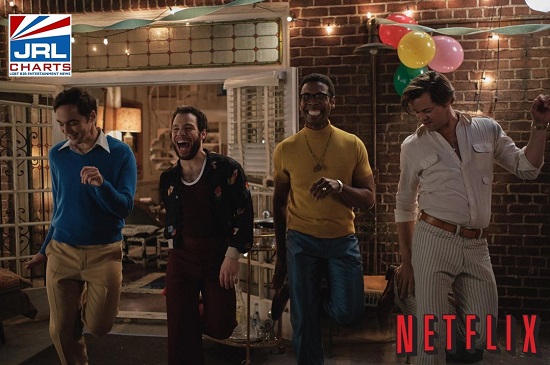 Synopsis:
“In 1968 New York City – when being gay was still considered to be best kept behind closed doors – a group of friends gather for a raucous birthday party hosted by Michael (Jim Parsons), a screenwriter who spends and drinks too much, in honor of the sharp-dressed and sharp-tongued Harold (Zachary Quinto). Other partygoers include Donald (Matt Bomer), Michael’s former flame, now mired in self-analysis; Larry (Andrew Rannells), a randy commercial artist living with Hank (Tuc Watkins), a school teacher who has just left his wife; Bernard (Michael Benjamin Washington), a librarian tiptoeing around fraught codes of friendship alongside Emory (Robin de Jesús), a decorator who never holds back; and a guileless hustler (Charlie Carver) hired to be Harold’s gift for the night. What begins as an evening of drinks and laughs gets upended when Alan (Brian Hutchison), Michael’s straight-laced college roommate, shows up unexpectedly and each man is challenged to confront long-buried truths that…”

Watch – The Boys In The Band Official Trailer

Based on ‘The Boys in the Band by:
Mart Crowley