OAK CREAK, WI — (04-05-19) — A gay couple’s landlord is reportedly threatening eviction over the couple flying their PRIDE flag. The homophobic landlord allegedly threatened Kevin Kollman and Merle Malterer by giving them a five day notice to remove the flag or face eviction.

Kevin Kollman and Merle Malterer say they have lived in the apartment for six years.

The landlord defended his actions by telling NBC2 that the issue isn’t over the gay couple displaying their love. However flags in general are not to be hung.

But the problem that the landlord has is that neighbors of the gay couple seem to have never had a problem flying their flags. “I’ve never been told to take them down,” a neighbor of Kollman and Malterer, who has a flag, told NBC2.

Both Kevin Kollman and Merle Malterer say that they plan to take down the rainbow flag so that they don’t have to deal with the costly expense of an eviction. Not to mention securing a new residence.

In fact according to The Advocate, Wisconsin bans LGBT discrimination when it comes to housing. 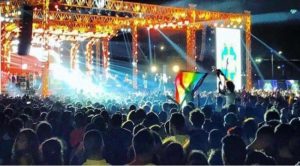