MECCA, SAUDI ARABIA — Mecca police have arrested an entire ‘gay wedding’ party near the holy city of Mecca. That included not only the wedding couple but also the guests.

Footage that has gone viral over the past few hours shows two men walking side-by-side while confetti is sprayed over their heads and music playing in the background. The duo can be seen proceeding down the make shift aisle while one of the men was seen wearing what looks like a wedding veil. (I take it he is the bottom).

In a statement posted on Twitter, Mecca Police said: “The man said people attending the event were surprised when a few young men entered the place and tried to perform a “gay wedding scene”.

Police have confirmed that they arrested the people involved in the supposed wedding after a man attending a festival at a resort near Mecca reported the incident.

The statement, translated from Arabic by Step Feed, said one of the men in the ceremony was a ‘crossdresser’.

Police further said….”The cross-dresser and other people involved in the incident were identified, they were all arrested and their case will now be referred to the prosecution.” 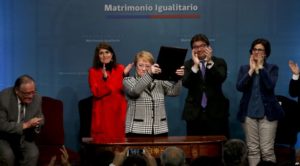