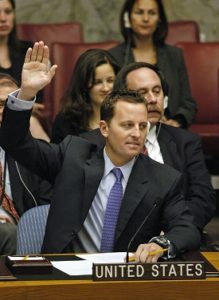 NATO, according to Bloomberg.

I attempted to contact Grenell for official comment on this rumor on Wednesday but received only a voicemail. We are hoping to get a comment on this surprising move by president Trump if it is true.

According to Bloomberg, their inside sources at the White House asked not to be identified because the position in question has yet to be cleared for the public.

Everyone will remember conservative republican Richard Grenell in his role as a spokesman under right wing war hawk John Bolton who has never met a war he didn’t like or want, as well as three other Republican-administration ambassadors who were assigned to the UN from 2001 through 2008. 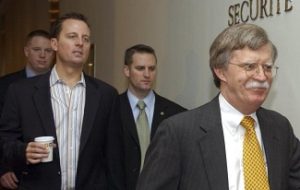 He has also been a Fox News contributor for four years and not surprising, became a Trump supporter at the start of the president’s presidential campaign.  He was also an advisor to former presidential candidate and former Governor of Massachusetts, Mitt Romney in 2012.

Grenell is also the founder of Capitol Media Partners where he has created a reputation for frequently getting into arguments and jabs directed towards journalists on his Twitter feed @RichardGrenell, throwing out wild accusations about reporters being unfair and totally bias against president Trump and the now majority in Congress and the Senate, the Republicans. 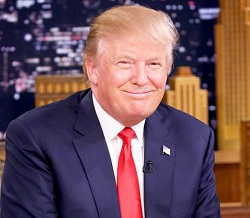 If Richard Grenell gets the job, he will be becoming the highest-ranking openly gay member of the Trump administration.