Richard Grenell, Trump’s ambassador to Germany, will also oversee the country’s 17 spy agencies on an interim basis until Trump nominates someone permanent for Senate consideration.

The first openly gay acting national intelligence director will manage the National Security Agency, FBI, and CIA among other agencies, as well as advise the president on intelligence concerns.

Grenell earned a bachelor’s degree at the local private Christian college before going on to Harvard for a master’s degree, according to the White House press office.

Mr Grenell is also a former Fox News contributor and served as US spokesman at the United Nations during President George W Bush’s term. He was confirmed by the Senate to the ambassador role in April 2018.

The President’s move to appoint Richard Grenall was a surprise to many given his lack of relevant experience and controversial record of pushing conservative policies as a diplomat.

But Mr Grenell is a staunch Trump loyalist and has been outspoken in his defence of the president as his role as Ambassador to Germany, to the point to where he had German officials demanding his ouster from the country for his outspoken comments on internal German politics. Critics say this bias will impede his ability to deliver neutral facts.

I am pleased to announce that our highly respected Ambassador to Germany, @RichardGrenell, will become the Acting Director of National Intelligence. Rick has represented our Country exceedingly well and I look forward to working with him. I would like to thank Joe Maguire….

Mr Grenell will replace the current acting director, Retired Vice Admiral Joseph Maguire, who must leave the post by March 12 in accordance with federal law. 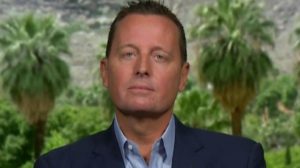