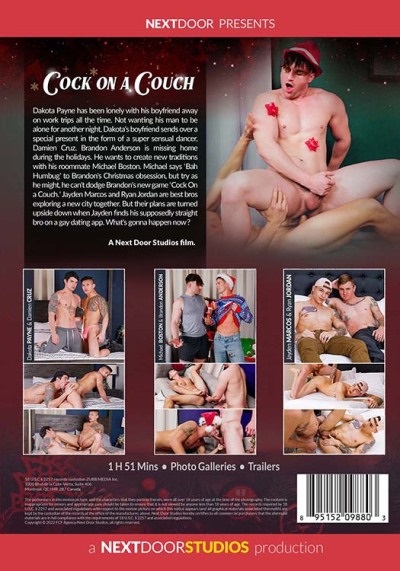 Synopsis:
“Dakota Payne has been lonely with his boyfriend away on work trips all the time. Not wanting his man to be alone for another night, Dakota’s boyfriend sends over a special present in the form of a super sensual dancer, Damien Cruz. Brandon Anderson is missing home during the holidays.

He wants to create new traditions with his roommate Michael Boston. Michael says ‘Bah Humbug’ to Brandon’s Christmas obsession, but try as he might, he can’t dodge Brandon’s new game ‘Cock On a Couch.’ Jayden Marcos and Ryan Jordan are best bros exploring a new city together. But their plans are turned upside down when Jayden finds his supposedly straight bro on a gay dating app. What’s gonna happen now?” – Conrad Parker and Walden Woods