“Our top priority is always the well-being of everyone we work with, including potential models,” said Vice President of Production Adam Q. Robinson. “We encourage prospective performers to submit their application, and if they’re a fit for an upcoming production, they will be contacted by either myself or one of our directors, but they will never be asked to pay any money to us under any circumstances.” said Robinson. 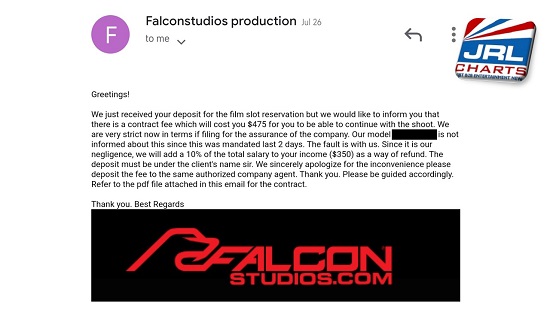 Potential models are then told they must pay deposits of $1,000 or more to cover different items such as contract and film date retainers, medical coverage fees, and more.

“We feel for anyone who has been scammed out of money to appear in our movies and hope we can raise awareness about this so nobody else is deceived or exploited,” said Tim Valenti, Falcon Studios Group and NakedSword Network President. “We’re committed to do anything we can to ensure that nobody else falls victim to this blatant misrepresentation and fraud.” said Valenti.

If you feel you’ve been targeted by this or any similar scam connected to Falcon Studios Group and NakedSword Network, email report@falconstudios.com with screen shots of messages and any supporting communication, and Falcon Studios will verify the validity of the messages.

Falcon Studios Group and the NakedSword Network ask anyone who is interested in performing in movies for the studios to apply via the group’s online Model Application at Model4Falcon.