Fan favorite Kyle Ross is back and better than ever in ‘Living the Dream’ as he brings his bottoming skills to an award winning level!  Plus while Helix is enjoying success in retail, they also are showing success on the JRL Gay Top 50 Chart by capturing 4 spots for the Month of May.

Synopsis:
California kid Kyle Ross is looking sexy as he steams up our photographer’s lens during an outdoor photoshoot. The beautiful blond decides to double our pleasure by inviting cocksure Corey Marshall into his shoot. Ross removes the jock’s shirt and the pretty pair kiss while wandering hands roam over one another’s smooth, chiseled bodies. Our photographer instructs Corey to give him more of Kyle’s cake, and after that the sex stars move from the street to the sheets. Kyle is quick to get on Marshall’s magnificent magic stick. He swallows the young muscle stud’s long schlong on his knees before getting creative for a fierce face fuck. The beautiful blond bottom backs up to Marshall’s meat, hard and horny and ready for a raw ramming. Corey accepts the amazing ass invite and slides his bare boner deep inside Kyle’s smooth caboose. Blondie’s surfer boy hair dangles in his pretty mug while getting masterfully cocked by Marshall’s member AND multitasking his own bouncing “business” for ultimate pleasure. Ross orders Corey onto the bed, gives that groin another spit shine, then hops on the huge hog for a raw ride. The fuck junkie faces away from his top at first, allowing us a gorgeous view of that bountiful bouncing bone spread eagle. Then, Ross spins his smooth sphincter around to kiss his cock king while controlling the thrust throttle. Marshall is anxious to tear into Ross’ rump hard and fast so he pushes his bottom onto his back and gets to work. 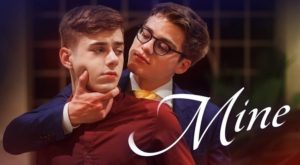