It is a great day for the LGBTQ community as Gallup reported Monday May 15, that a record high number of adults say that same-sex marriage should be legal throughout the United States.

Since the U.S. Supreme Court’s ruling to make same-sex marriage the law of the land, over Over 96,000 Same-Sex Marriages were performed just in the first year. 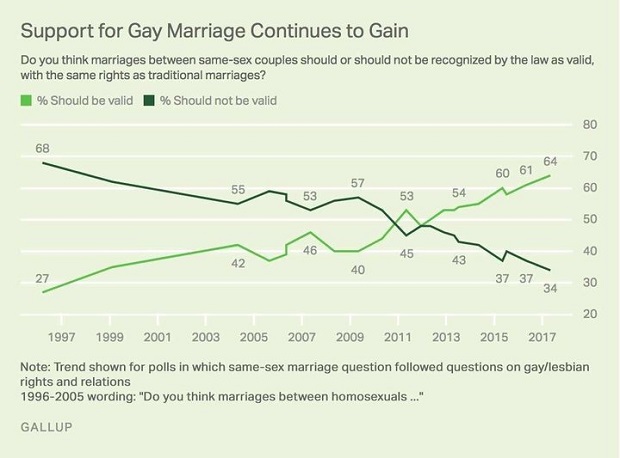 Even though the U.S. Supreme Court’s historic ruling on same-sex marriage which made it the law of the land in 2015, state laws continue to resist the ruling and still are targeting the LGBTQ community with discrimination style legislation.

The breakdown in LGBT politics in Support for same-sex marriage has grown among all political parties since 1996.

While this has been an explosive year for Republicans to identify with the LGBTQ community, GOP voters and Independents voters are showing a record high in support of same-sex marriage.

Now I know you were waiting on the great finale – The number of religious conservative voters who support same-sex marriage has also increased. Yes….”INCREASED”.  A majority of U.S. Catholics came in at 55 percent in support of same-sex marriage compared to 27 percent back in the days of “Queer as Folk” in the early 2000s.