Screen Media Films has just released its 2nd US trailer for the Scottish historical action drama Robert the Bruce, directed by Richard Gray.

The film is set to be released in the United States with a premiere screening by Fathom Events for one-night-only on April 16, 2020. This will be followed by a limited theatrical release on April 24, 2020 by Screen Media Films, to coincide with the 700th anniversary of the Declaration of Arbroath. 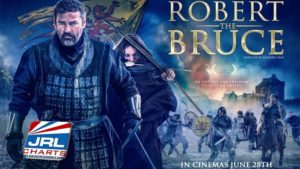