BRASILIA, BR — (02-10-19) — The 38th president of Brazil Jair Bolsonaro, and his right wing government, are set to remove any mention of homosexuality, violence against women and feminism from all of their schools’ textbooks.

While president Jair Bolsonaro has been in the hospital since last week from an operation to remove a colostomy bag fitted after he was stabbed while campaigning last year, he has now been diagnosed with pneumonia.  Some would call that karma coming home to roost for his dark ideology of hate.

Talk about extreme, dark ages president Bolsonaro said that he is willing to allow the military to take charge of public schools to make sure that his dark age anti-LGBTQ and anti-Femnism ideology is enacted.

President Jair Bolsonaro has boasted to his constituents and the media hw he is a self described “homophobic and very proud of it”. With comments like that, it is no wonder that he is going full steam ahead with Erasing any mention of LGBTQ Content From Brazilian Schools ranging from Brazilian schools.

The homophobic Brazilian president has a record for homophobic statements including “I would be incapable of loving a gay son” and “I would rather have a child die in a tragic accident if he were gay”. With comments like that, this reporter often wonders if his hatred for the LGBTQ community could be that he is a closeted gay man with serious issues.

It is sad to think that in the 21st Century you would still have dangerous people like president Jair Bolsonaro with his dark age ideology, would rise to the ranks of president of Brazil. 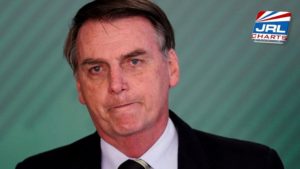