JERUSALEM, ISRAEL — (01-02-23) — Top Haredi rabbi Meir Mazuz with close ties to senior members of the new government called Gay Knesset Speaker Ohana someone that is .infected with a disease’.

Rabbi Meir Mazuz said the outrageous statement during his weekly sermon as the head of the Kisse Rahamim Yeshiva in Bnei Brak. During his sermon he told students…“There is a time when everyone will be asked; Are you part of the Pride Parade or part of the humility parade?” said Mazuz.

“You should distance yourself from it,” Mazuz continued…“You see people walking and bragging [about] the Pride Parade in Jerusalem. Close the windows and tell your children: ‘This is a parade of animals, you have no business looking at it. These are animals walking on two legs. What can we do about them?’” said Mazuz.

Knesset Speak Amir Ohana responded to Mazuz’s outrageous remarks on Sunday saying he’d rather “fail a hundred times with unrequited love of Israel and to do so once from baseless hatred of Israel.” said Ohana.

Last Saturday openly Gay MK Amir Ohana made history by being appointed to the position of Knesset Speaker. 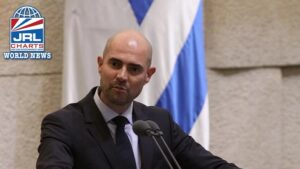