The triumphant mood played out against right wing conservatives and their media outlets never ending war on the LGBTQ Community, which has alarmed gay and transgender Americans.

Among the attendees at the White House included the owner of the popular gay nightclub, Club Q, a nightclub in Colorado where five people were killed in a shooting last month. Two survivors from the attack were also in attendance. The defendant in the mass shooting at Club Q has been charged with hate crimes.

Plaintiffs from lawsuits that originally helped secure the nationwide right to same-sex marriage were also in attendance on this historic day.

“It’s not lost on me that our struggle for freedom hasn’t been achieved,” said Kelley Robinson, president of the Human Rights Campaign. “But this is a huge step forward, and we have to celebrate the victories we achieve and use that to fuel the future of the fight.” said Robinson, who attended the ceremony with her wife and 1-year-old child.

“Our kids are watching this moment,” added Robinson. “It’s very special to have them here and show them that we’re on the right side of history.” said Robinson.

“Congress has restored a measure of security to millions of marriages and families,” Biden said in a statement when the legislation passed last week. “They have also provided hope and dignity to millions of young people across this country who can grow up knowing that their government will recognize and respect the families they build.” said Biden. 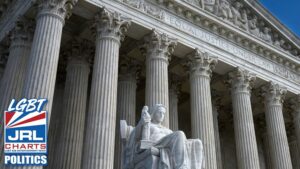