LOS ANGELES, CA – (09-16-22) (PR-JRL CHARTS) – The Trans Erotica Awards (TEAs) are proud to announce the dates for their 2023 event, to be held March 17-19, at the historic Avalon in Hollywood, CA. Additional information will be released in the weeks to follow.

“We’re already chugging along with planning for our 2023 show,” said TEA Executive Producer Kristel Penn. “2023 marks our 15-year anniversary of hosting the event, so guests can expect something special to commemorate the history of our show. I hope to see you all in Hollywood in 2023!”

The TEAs were first concepted as a modest online competition and then expanded into a live event originally hosted at several venues in Los Angeles before making its home at the Avalon and its connecting property, the Bardot. The star-studded two-day affair welcomes guests from all around the world and is the only event that exclusively celebrates the achievements of the trans adult industry and its performers. 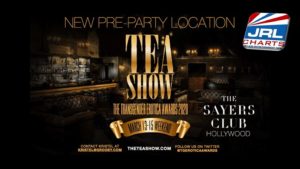