LAS VEGAS — (07-26-22) — Twenty-two states controlled by Republican legislatures are suing the Biden administration over a rule that would cut federal meal funding for schools that discriminate against LGBTQ faculty and students.

“We all know the Biden administration is dead-set on imposing an extreme left-wing agenda on Americans nationwide. But they’ve reached a new level of shamelessness with this ploy of holding up food assistance for low-income kids unless schools do the Left’s bidding,” said AG Rokita.

The U.S. Department of Agriculture (USDA), named as a defendant in the suit, announced in May that K-12 schools and other qualifying organizations would need to update their policies to include LGBT protections in order to receive funding from the Food and Nutrition Service.

The rule is part of a Biden administration initiative to combat discrimination against LGBT students who have become a target for right wing extremists legislation that has been passed in GOP controlled states.

Food, Nutrition and Consumer Services Deputy Under Secretary Stacy Dean said back on May 5….“Whether you are grocery shopping, standing in line at the school cafeteria, or picking up food from a food bank, you should be able to do so without fear of discrimination,” said Food.

The lawsuit accuses president Biden of asking federal agencies to rewrite federal law and alleges the USDA ignored procedural requirements and misconstrued the law in issuing its directives.

One has to wonder when these insecure, sex deprived, dark age Republican extremists learn that we are not going back into the closet! No matter how many Salem Witch hunt stunts they attempt to make law. 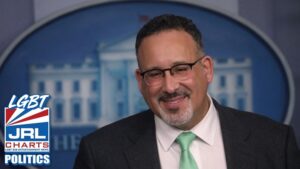