LOS ANGELES — (03-13-22) — History was made last week when the Los Angeles City Council’s unanimous confirmation of LGBTQ American Kristin Crowley as the next Fire Chief of the Los Angeles Fire Department (LAFD).

The Los Angeles LGBT Center’s Executive Director Joe Hollendoner was so excited that he issued the following statement:

“The Center applauds the historic confirmation of Kristin Crowley to lead the fire department of the nation’s second-largest city. She is the first female fire chief of the LAFD and the first openly LGBTQ person to hold the position. She has dedicated more than two decades—previously as the City’s first female and first LGBTQ Deputy Chief Fire Marshal—to serving our communities and ensuring the safety and well-being of all Los Angeles residents. We cannot imagine a more qualified candidate for the job.

“We thank the City Council for unanimously approving Crowley’s appointment, and we commend Mayor Garcetti for nominating her from the beginning. Crowley now joins a handful of pioneering LGBTQ fire chiefs nationwide who are out and proud, and we salute her for being an LGBTQ role model who has been making a positive contribution to our city.

“Congratulations, Chief Crowley! It is evident to me from our conversation prior to your confirmation that you are highly committed to strengthening the relationship between LAFD and Los Angeles’s LGBTQ community. Everyone here at the Center looks forward to partnering with you, and we wish you the very best during your tenure.”

On behalf of the JRL CHARTS LGBT Politics News Division, congratulations to Kristin Crowley on her new position as Fire Chief of the Los Angeles Fire Department. 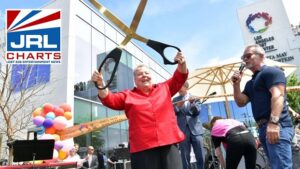