Gallup Poll: Record 7 percent in US now identify as LGBT

Gallup Poll: Record 7 percent in US now identify as LGBT

LAS VEGAS – (02-17-22) – A new Gallup poll released on Thursday shows the percentage of U.S. adults who identify as LGBT has increased to a new high of 7.1 percent.  The Gallup poll also found that 86.3 percent of respondents said they are heterosexual or straight, while 6.6 percent did not reveal their sexual orientation.

The newest measurement of LGBT identification has doubled in percentage ratio since the last poll was taken in 2012, when Gallup first measured it. According to Gallup, the percentage of LGBT Americans has been steadily increasing since the poll began.

Gallup added that “The increase in individuals who identify with the LGBT community primarily reflects the higher prevalence of such identities among younger Americans.” 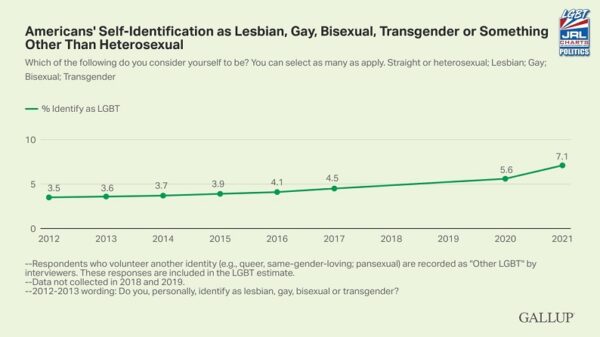 Approximately 1 in 5 Generation Z Americans, born between 1997 and 2003, now identify as LGBT, almost double the number of millennials!

The most common identification from respondents who identify as LGBT was bisexual. That group came in at a whopping 56 percent.

The Gallup poll was conducted throughout 2021 and surveyed 12,416 U.S. adults. It has a margin of error of 1 percentage point.