Synopsis:
“Freshmen’s location today seems as if it were made just to enhance the beauty of their 2 exquisite models, Bart Cuban and Jon Kael, as they start off having thier pictures taken against the spectacular Greek background before heading inside to take their budding romance to the next level. The Freshmen Network liked this combination of guys so much that they used their photoset as the opening of the whole series earlier in the year, so it is really good to see that they backed up the photo session with this sizzling scene as well.” 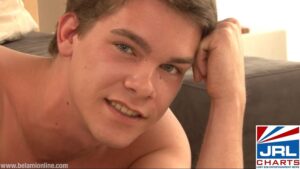