The boys chat about Sam’s sizzling public sex adventure, then Ledger let’s Brooks know, he’s heard about his big dick! From there, all bets are off, and the boys get busy with passionate kisses, gropes and licks during a salacious strip down.

They inspect their protruding packages with wandering hands; and, Silas can’t wait to taste the newbie’s bulging bone! He kneels and receives a fire hot face-fuck from the 20 year old hottie, and his perfectly curved cock.

Anxious get to at Silas’ rock hard jock, Sam sneaks down to his knees, and inhales the mighty member with mouth watering abandon. Hell bent on breaking the new dude in good, Brooks leads the boy to the bed, bends him over, and dives into one of the most delicious asses in town.” – Alex Roman 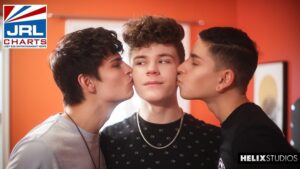