ANA, IL — (10-24-21) — Just when you thought you’ve heard and seen it all, a survey asking high school students if they think “queers” should be allowed to use the school restroom with “normal people”, was circulated at the Anna-Jonesboro Community High School last Wednesday.

This is yet another attack on LGBTQ youth and follows recent attacks on LGBTQ students across the USA. The survey was distributed at Anna-Jonesboro Community High School by an unidentified number of students who identify themselves as the “Anti-Queer Association,” according Rob Wright, the school’s superintendent.

It asks students to vote either “(YES) I WANT QUEERS TO GO IN THE BATHROOM” or “(NO) I DON’T WANT QUEER KIDS TO GO TO THE BATHROOM WITH US NORMAL PEOPLE.” 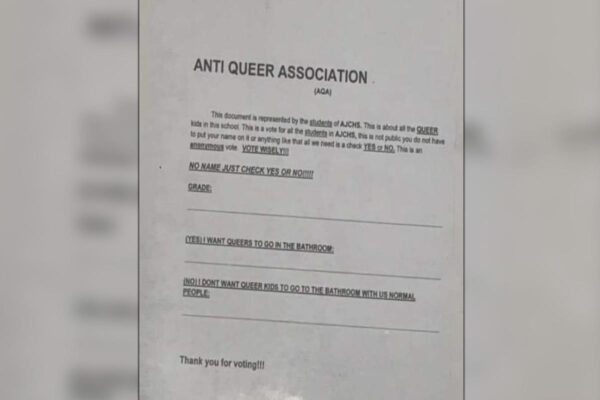 Superintendent Wright told NBC News…”Only a few copies of the poll were handed out before the school discovered them Wednesday morning, but an image of the survey was posted on Facebook.” He added that the number of students involved in the debacle was “very limited”

“I really can’t give any specific information regarding any individual students or what those measures were taken, but I can tell you that this type of harassment is taken very seriously by the district,” Wright told NBC News. “We’re not going to tolerate it under any circumstances.”

The Rainbow Cafe LGBTQ Center in Carbondale, Illinois wasted no time in sharing a Post on Facebook alerting local LGBTQ youth that they are supported and that the center is “working with statewide agencies to determine the best course of action.”

When will this hate end? We are now going into nearly 25 years of the 21st Century and yet we are still dealing with insecure people who teach their young on how to be insecure about their own sexuality to the point to where they feel they need to psychologically, physically and verbally attack the LGBTQ Community.