WASHINGTON D.C. — (01-06-21) — A pipe bomb was found at Republican National Committee (RNC) headquarters just blocks away from the Chaos taking place at the U.S. Capitol. A second device was found near the Democratic National Committee (DNC) offices which forced the evacuation of all personnel.

The discoveries were reported by The New York Times on Wednesday afternoon as a mob of President Trump’s supporters stormed the U.S. Capitol building, a chaotic and violent scene that prompted the evacuation of lawmakers, congressional staffers, reporters and deployment of the Washington D.C. National Guard.

According to the Times’s reporting, the pipe bomb at the RNC headquarters was destroyed by a bomb squad, while the suspicious package found at the DNC offices has not yet been identified.

The explosive found at the RNC headquarters and the evacuation of the DNC headquarters added to the already chaotic events unfolding at the Capitol, as members of Congress met to certify President-elect Joe Biden’s Electoral College win.

Thousands of Donald Trump supporters gathered in Washington ahead of the joint session. Trump repeatedly made the unproven claim that the 2020 presidential election was “rigged” and demanded that Republican lawmakers, his vice president and other allies push to overturn president-elect Joe Biden’s victory.

Those tensions boiled over on Wednesday when supporters of the president broke into the Capitol which resulted in a woman being shot, congressional offices being vandalized and lawmakers held in a secure bunker. Vice President Pence, who was presiding over the joint session of Congress, was evacuated from the chamber and taken to a secure location.

The Washington, D.C., and Virginia National Guards were activated Wednesday afternoon to aid district police in quelling the unrest. 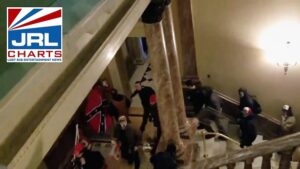