Synopsis:
“Buff, studly, young Dane is here to have his way with Jesse, and Jesse’s here to take things to a whole new level for him as he’s getting fucked! Truth be told, I suspect Jesse wanted this from the moment he arrived at Corbin Fisher Studios.

He’s admitted to playing with his hole before and even acknowledges as much when Dane asks him about it at the start of this episode, but now he’s going to get his mind blown as Dane rails him! Dane asks Jesse if Jesse’s ever had his prostate stimulated, but that’s far from the only thing Jesse’s going to enjoy about the action that follows.

Beyond how incredible the physical sensations are for Jesse, Jesse’s going to enjoy giving himself up completely to Dane, having Dane take charge of him, and knowing a fellow stud’s hard dick is totally going to town on his ass. There’s a mental and psychological aspect to it all, along with the physical, and it’s obvious that it’s all driving Jesse wild. Dane will do that to ya!” 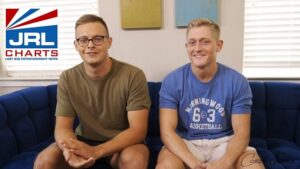 Marco Antonio and Andy Star Bring It in Rough Games