MONTREAL, QC – (08-24-20) – Carnal Media has sent word to our newsroom that they have signed a “multi-distribution deal” with Stunner Media to encompass all media platforms, including broadcast rights, DVDs and VOD/digital distribution.

The Stunner Network is “the best and only choice” for gay content, said Tom Ford, public relations director for Carnal Media. “We have been watching Stunner outperform other distribution options in the gay space, and we feel no one is on top of their game like Stunner.” said Ford.

They parted ways with the sites in 2017 after “a very short-lived partnership with a larger, straight company [which] resulted in a hostile takeover,” a rep explained, and went on to create Carnal in 2018.

The distribution partnership includes plans for “the most ambitious year for Carnal Media yet,” added Ford, with ten new sites on the boards and a new network site.

“Right out the gate, Stunner had more opportunities, better contacts, broader reach and was able to deliver better contracts at better rates than others we have worked with,” continued Ford. “And here’s the bottom line: Stunner understands gay marketing and gay distribution in a way that others don’t. There’s just no competition.”

Nicolas Fournier, Stunner Media head of licensing, described the company as “very proud and quite pleased” to add Carnal to their portfolio…”They are very professional and love what they do. It clearly shows in the quality of their content,” said Fournier.

Current plans include Carnal title per month to be released per month, beginning with the forthcoming collection “Boy for Sale: The Boy Austin.”

Webmasters can get additional information by contacting Nicolas at Carnal Media. 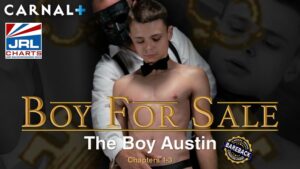