LatinBoyz Models TALVEZ & EDDIE Now Streaming – The Wait is Over

LatinBoyz Models TALVEZ & EDDIE Now Streaming – The Wait is Over

Synopsis:
“They enter the restroom at nearly the same time. The twink quietly locks the door behind them and stands at the urinal next to Talvez. He pulls out his hard cock and starts stroking it right away. Talvez notices and pulls his own throbbing dick out for Eddie to look at. Clearly Eddie isn’t going to waste a moment like this. He immediately drops to his knees and starts sucking Talvez’ big dick. After a couple minutes he’s rewarded with a huge load of cum being shot down his throat. Before going their separate ways they exchanged numbers and Eddie lets it be know he wants to get fucked. Talvez says he wants to do it but only if they do it in a LatinBoyz video together!”

BiLatin Men turns up the heat with “Wood & Code” 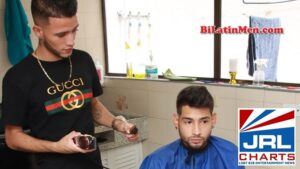 Vladimir Stark takes Every Inch from Sir Peter on TimTales