WASHINGTON, D.C. — (06-17-20) — President Donald Trump said “scumbag” journalists should be jailed and executed if they don’t divulge their sources”, during the summer of 2019, according to new excerpts from John Bolton‘ upcoming book “The Room Where It Happened.”

“Bolton attributes a litany of shocking statements to the president. Trump said invading Venezuela would be “cool” and that the South American nation was “really part of the United States.” Bolton says Trump kept confusing the current and former presidents of Afghanistan, while asking Japanese Prime Minister Shinzo Abe to help him strike a deal with Iran. And Trump told Xi that Americans were clamoring for him to change the constitutional rules to serve more than two terms, according to the book.

He also describes a summer 2019 meeting in New Jersey where Trump says journalists should be jailed so they have to divulge their sources: “These people should be executed. They are scumbags,” Trump said, according to Bolton’s account.”

Other new details that have come to light Wednesday within the unreleased book include Trump’s scheme to ask Chinese President Xi Jinping win the 2020 election over former Vice President Joe Biden and multiple moves the president made so he could blame former President Barack Obama for wrongdoings.

On Tuesday, the Department of Justice filed a civil lawsuit against Bolton over the publication of the book citing national security. Per NBC News, Bolton’s lawyer responded saying that the government is “making things classified that isn’t classified.”

Once word broke that John Bolton’s book “The Room Where It Happened”, was set to be released in late June, Trump immediately went on the attack bashing his former national security adviser, calling the book “highly inappropriate.”

On Monday, president Trump said, “Maybe he’s not telling the truth, he’s been known not to tell the truth, a lot.”

The Los Angeles Times reported Wednesday that the Justice Department (DOJ) is expecting to seek the temporary injunction in the days ahead. A request for comment from JRL CHARTS was not immediately returned. 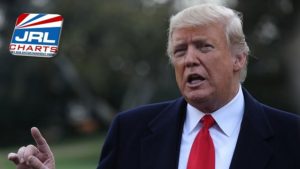