WASHINGTON D.C. — (05-15-20) — The U.S. Navy grants its first-ever waiver under President Trump’s transgender military ban to an individual who sued to remain in the Navy.

The waiver was granted to “Jane Doe” in the case against the transgender military ban filed back in March by the National Center for Lesbian Rights and GLBTQ Advocates & Defenders (GLAD).

The officer who sued the U.S. Navy has served two extended tours of duty over the past nine years and was facing discharge simply because she is transgender. Attorney Jennifer Levi, transgender rights project director for GLAD, confirmed in a statement released on Wednesday May 15, that the waiver had been granted to her client.

“The ban has been in place for over a year and this is the first waiver to be granted,” said Levi. ”While we are relieved that our client, a highly qualified Naval officer, will be able to continue her service, there are other equally qualified transgender service members who have sought waivers and are still in limbo, despite being perfectly fit to serve.” said Levi.

The transgender military ban has been in place since Trump’s announcement via twitter in February 2017. 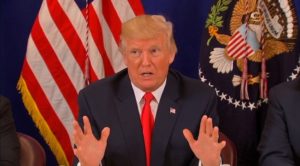