BOSTON — (12-08-19) — Man now faces hate crime charges after being arrested by Boston police for alleging hitting another man over the head with a snow shovel and slashing his face with a box cutter while using antigay slurs during the.

Police say the victim identified as 25-year-old victim Victor, who they say was walking in the North Roxbury neighborhood area last Tuesday around noon when the man attacked him.

According to police, the suspect started yelling antigay slurs at him and then proceeded to assault him.

The victim needed 20 stitches above the eye and 15 stitches below.

Victor told WHDH-TV that the suspect knows who he is from previous encounters on the street. ‘Whenever he sees me, he starts disrespecting me. Calling me the f-word,’ Victor, who insisted on using just his first name, said. ‘The only difference yesterday was that I said, “Yeah, I’m proud”.’

“Officers rendered first aid to the victim until Boston EMS arrived on scene and transported the victim to a local area hospital with non-life-threatening injuries,” said a statement from the Boston Police Department.

“After further investigation, it was revealed to officers that the suspect struck the victim in the head with a snow shovel then pulled out a box-cutter and slashed the victim over his eye.”

Police were able to track down the suspect and arrest him without incident. He is identified as Eddie Smith, 58, of Boston. Eddie Smith is charged with (1) count of civil rights violation (hate crime), assault and battery with a dangerous weapon, and mayhem. 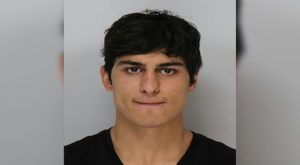