This is the same homophobic former congressional politician who tried to use anti-LGBT propaganda in his reelection bid for the U.S. House in 2018 where he lost to a Lesbian, Congresswoman Angie Craig.

Now Jason Lewis wants to be represent be the Republican U.S. Senator for Minnesota, challenging Senator Tina Smith. Senator Smith (D) was appointed in January 2018 to fill Al Franken’s seat after he resigned over accusations of sexual misconduct. Though she did win a special election in November, she must run again in 2020.

With the Trump administration continuing their war on the LGBTQ community, its no surprise that Republican Jason Lewis, who Compares Gay People to Rapists and Warns They May ‘Harm’ children, is running to Unseat popular Democratic Senator Tina Smith.  This is truly the Twilight Zone! 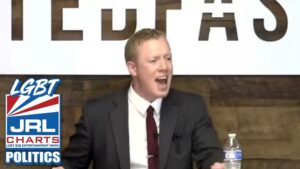