NEW YORK, NY — (08-22-19) — Residents watch in horror as a malfunctioning elevator in a Manhattan high-rise apartment building,  cuts him in half in a gruesome and nightmarish way on Thursday morning.

Video of the graphic incident, captured by the Manhattan Promenade building’s security cameras, shows one person getting out of the elevator. Then when another passenger tries to exit, the elevator plummets down, shearing him in half and crushing his body against the shaft. 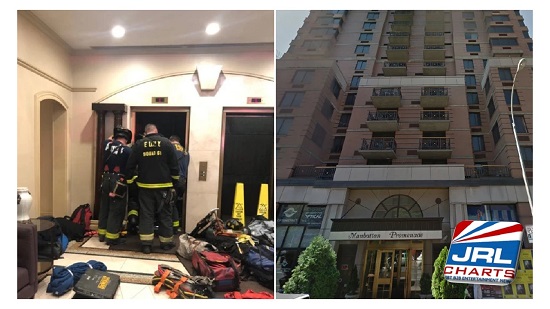 The victim has been identified as 30 year-old Samuel Waisbren.

First responders raced to rescue the remaining five people who witnessed Waisbren being sheared in half and who were still trapped and traumatized inside the cramped metal caged elevator.

“Some people were still left down in the car after it moved down in the basement,” said FDNY Deputy Chief Anthony Arpaia.  “The FDNY had to work really hard to get the car moved.” said Chief Arpaia.

“The guy literally was trying to climb out onto the floor while the elevator was still [moving down],” said one of the Manhattan Promenade building employees, who witnessed the death and asked not to be identified. “It’s awful.”

“He was a wonderful young man,” said his father, Charles Waisbren, who added that his son had moved from their family home outside Milwaukee to settle down in the Big Apple, where he worked in software sales. “He had millions of friends out in New York. He was loved by everybody.

“We are absolutely devastated.”

The horrific scene, which played out at the 23-story Manhattan Promenade Tower on Third Avenue near East 25th Street just after 8:15 a.m. on Thursday.