Mayor Cirulli called the LGBTQ movement “an affront to almighty God” last Tuesday in a town committee meeting. He is opposed to a recently passed law that requires schools to teach students LGBTQ history.

We are once again witnessing insecure politicians beating a dead horse over legislation pass back in January.

“The government has no right to teach our kids morality,” said Cirulli said at the town committee meeting. “We’ve crossed over the line into absurdity.” said Cirulli. The 3 term Republican mayor says that it is “time for the righteous to stand up for their rights.” said Cirulli.

Mayor Cirulli’s anti-LGBTQ comments were met with swift and severe criticism from Barnegat residents on Twitter. The mayor responded to critics by saying…”The law goes too far. They could go to the extremes with this, like bringing in a drag queen to kindergartners,” he said, adding that he worries it will lead some children to have “an identity crisis.” responded Cirulli.

New Jersey is the second state after California to enact legislation requiring students to learn LGBTQ history. The law applies to the upcoming 2020-2021 school year.

Superintendent of the Barnegat Township School District, Dr. Brian Latwis wrote in a statement on the district’s website, that all of our schools will comply with state guidelines.

“Barnegat Schools will do everything we can to navigate challenges and difficult situations with sensitivity to all members of this Barnegat family,” Latwis wrote.

Mayor Cirulli has yet to respond to a request for comment to JRL CHARTS but should we receive one, we will update this article with his comments. 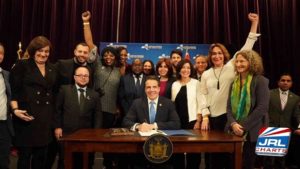