MONTGOMERY, AL — (07-17-19) — Alabama Secretary of State and GOP Senate candidate John Merrill, is angry over “homosexual activities” replacing “good TV shows”.  In his mind, Americans no longer have TV shows like those of the 1950s, 60s and 70s.

“There are no more good TV shows on like ‘Gunsmoke’, ‘Bonanza’, ‘The Virginian’, ‘Andy Griffith’ and ‘I Love Lucy.” said Senate candidate John Merrill. “We don’t have those shows anymore. We’re too interested in homosexual activities,” said Merrill.

Merrill had the nerve to say that Americans are “too interested” in watching and getting brainwashed with “how people are trying to date on TV” and “having wife-swapping on TV.”

“The foundational principles which we have grown up as a nation are no more,” John Merrill told AL.com. He repeated his view that people are too willing to watch “the wife swap TV shows and the shows that are not morally uplifting” and not based on “biblical foundations. That’s the problem,” Merrill told AL.com.

Merrill declined to elaborate on what he meant by “homosexual activities” to the Alabama news site but we are sure to see Merrill use his fundraising campaign emails use his comments to attract anti-LGBT voters in Alabama.

Merrill is one of several GOP candidates seeking the party’s nomination in the race against Jones, who won a 2017 special election against Republican candidate Roy Moore.

The funny thing is disgraced former State Supreme Court justice and teen girl predator Roy Moore is also running again on the GOP ticket. What a line up the Alabama senate race is lining up to be. 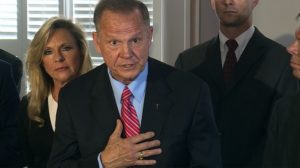