Carnal Media and the GunzBlazing network are excited to launch a niche site that celebrates tall guys paired up with short ones for hot gay erotica encounters.

“There is a very palpable feeling of excitement here at Carnal with all our new site launches and the growth of our staff,” said LeGrand Wolf, president of Carnal Media. “Fun Size Boys celebrates something I personally love—big guys paired with small guys. At 6-foot 6-inches, I’m on one end of the extreme and I love the feeling I get when I’m looking down and the smaller guy is looking up … there’s nothing like it. ” said Wolf. 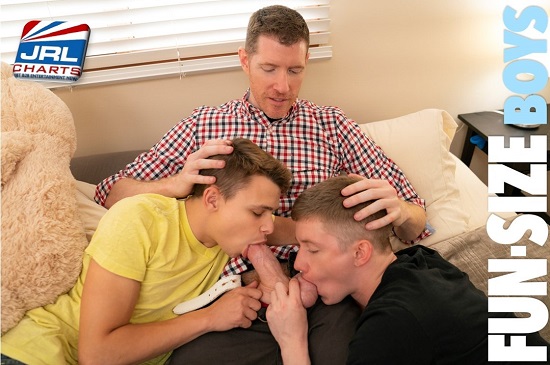 Wolf continued…”We wanted to bring this idea to life for those who crave gay size difference. Let the shorter guys and the super tall guys live out their biggest fantasies! And for the height-differential-loving masses everywhere, we are proud to present this first of its kind site.” said Wolf.

On Fun Size Boys, short “fun size” boys are discovered by tall “king size” men, and both love nothing more than the idea of hooking up with the other extreme. The shorter guys ride the monster cocks of the big men, climb their big bodies and take their big loads, all while enjoying the thrill of being fucked by a giant.

Fun Size Boys makes this the third new site debut in 2019 for Carnal Media, following the groundbreaking Growl Boys and the controversial Boy For Sale. In addition, the team is growing fast with the official hiring of Danny Go just last week as event manager for Growl Boys.