But the course of true love takes some nasty and obsessive turns along the way. The style is dramatic and almost operatic, narrated by the characters in soft white closeup as the action unfolds.

Director Koloff had planned to rely on long patches of voice-over, but keeping the action tight and compelling proved to be a challenge.

“I decided to turn to reality television-style ‘confessionals’ where we see the halo-lit characters telling their own stories that fade into narrated action.” said Koloff. “It seems more personal and involving, and allows for a more visual, active style of storytelling.” said Koloff.

Synopsis:
“David and Max’s fractured romance unfolds over five episodes spanning from their meeting cute in an empty midnight cafe through cheating, betrayal, revenge and reconciliation. Principal photography in Vegas used studio and location sets, including a hot seduction in the dark hallways of famed Entourage Gay Spa and a custom-built cafe set at famed Falcon Studios

The action in Feed Me Your Love is unmistakably pornographic, but seamlessly integrated into an indie art film milieu that lends a deeper emotional connection to the overheated story.

Feed Me your Love’s out-there title refers to a strangely romantic sharing of post-coital fluids that “seals the deal” for love-driven David Ace.  Script writer Len Whitney was inspired by an unlikely source, an old 2013 Norwegian Eurovision entry in James Bond style called “I Feed You My Love”.

The song’s blazing horns and strings brought to mind the hot sizzling drama of David Ace and Max Konnor’s coupling and a series title was born.

Creator Danny Zeeman wanted a video series that would stretch the bound of what viewers expect in pay adult entertainment.

“With Feed Me Your Love, we went straight for the jugular in a heart-wrenching tale of love, lust, jealousy and betrayal,” said Zeeman. “Finally a gay adult film where the story line is tantamount to the sex, and in true dramatic fashion we end in an all-out confrontation that brings all of our stars closer together…quite literally.” said Zeeman.

Gayvengers DVD – PeterFever Is Coming to Retail in July 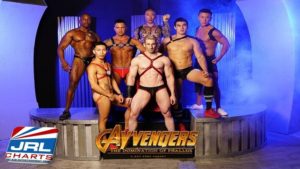