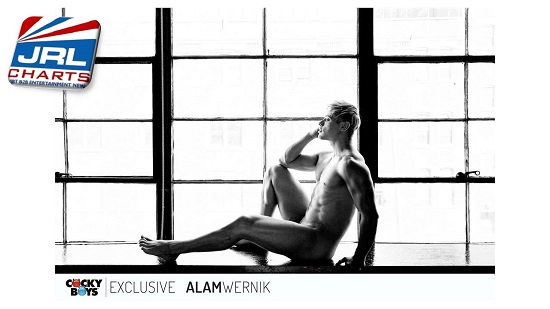 Wernik’s charismatic appeal has drawn more than 1 million followers on social media, so he’ll fit in right in with the CockyBoys brand.

“I am so excited to be the newest addition to the CockyBoys family.” said Alam Werik. “I’m all about change and climbing to the next level in my career. I know CockyBoys will provide me with an amazing final year in this industry and together we will create projects that give people an inside look at the real me, and my passion in life as a DJ, and much more!” said Wernik.

Wernik will be paired with some of the biggest CockyBoys stars and featured in special projects by Jake Jaxson beyond the scene pairings and releases that are already planned.

“His energy, attitude, focus, personality, and sex appeal make him an ideal CockyBoy, we couldn’t be happier that he decided to join our team.” said Jake Jaxson of his new exclusive star. “In one short year, he has burst on to the scene and created a body of work that is to be admired, and I’m sure he will agree, in big part thanks to the team at Falcon and NakedSword. We look forward to helping Alam continue to follow his ambitions and reach his goals here at CockyBoys.” said Jaxson.

Alam Wernik is set to make his CockyBoys debut soon. As soon as we get word of his upcoming project, we will bring it to you. Follow Alam Wernik daily on Twitter.