SAN DIEGO — (03-26-19) — A 55-year-old man was stabbed in the neck at the popular Adult Bookstore in the Midway District early Monday morning.

According to police, the man was purchasing goods at the Adult Superstore located at 3610 Barnett Avenue when a white male walked up behind him and stabbed him in the neck with a knife. The suspect then fled the scene in an unknown direction.

The adult store employee immediately called police and an ambulance for the victim. The 55 year-old was transported to a hospital to be treated for non life-threatening injuries.

“Investigators are trying to determine if the two men know each other. However at this point, it appears to be a totally random attack,” said Sgt. Joe Ruvido of the San Diego Police Department.

Police say the suspect is described as a white man between 25 and 30. He was wearing a blue shirt, black shorts, white shoes and a backwards baseball cap. 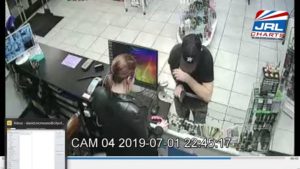