A striking face, piercing eyes with a steely gaze and chiseled, tatted body are just the beginning of what makes Aaron Savvy a sought-after stud. Add to that his huge, 8.5” cut endowment, inviting ass, sexually charged personality and intense performances, and you’re presented with all the makings of a Falcon Studios Group and NakedSword Exclusive. 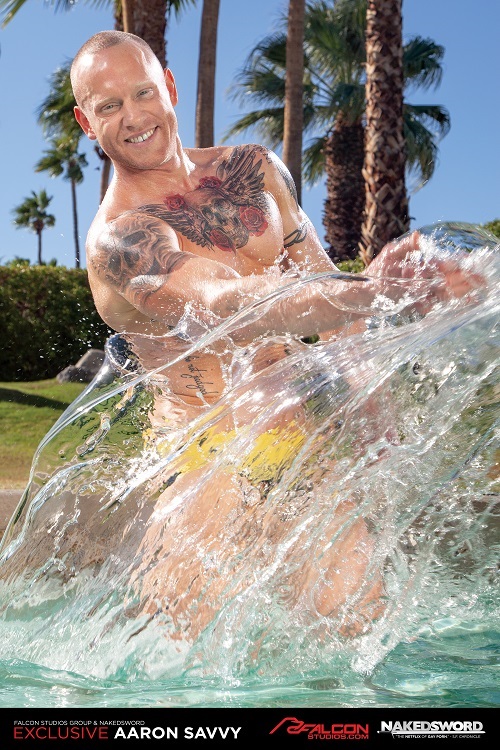 Aaron Savvy first worked for Falcon Studios Group when he appeared in Hot House’s sports gear fuck fest, ‘Gear Play’, and he recently wrapped shooting Falcon’s next pool movie ‘Get Wet’ due out on February 15, 2019. While looking to build a new group of talented and stunning exclusive performers, Falcon Studios Group and NakedSword Network president Tim Valenti selected Savvy from the list of recently shot performers who had the goods and who could enhance any of the group’s brands.

“Not only is Aaron Savvy a handsome stud, he brings 100% to every shoot and he has a versatile look that translates to many of our brands,” said Valenti.. “He really fits perfectly into our list of exclusive models, and we’re excited to feature him prominently in the coming year. Fans are going to be more than pleased with his new scenes.” said Valenti.

“I gotta say, it really is an honor to be a part of the Falcon and NakedSword family.” said Aaron Savvy on his new contract. “I’m humbled to become the next exclusive, because to me it says a lot. It says, they believe in my talents and it tells me they know I can deliver and give them great content. With a great task given, I’m taking the responsibility to be the best and deliver greatness. I’m ecstatic for this new and bright year of 2019. Falcon and Naked Sword? I couldn’t be happier.” said Savvy.