PHOENIX, AZ — (12-18-18) — Anti-LGBT politician Martha McSally whom you will remember lost her U.S. senator bid to Senator Kyrsten Sinema (D) last November, has now been appointed to serve out the remaining 2 years of the late John McCain’s Senate seat.

Ducey had appointed John Kyl, who had previously served in the Senate from 1995 to 2013, the month after McCain’s death, but he announced his retirement last week.

The Human Rights Campaign (HRC), released a statement on the appointment of Martha McSally.

“In the 2018 midterm election, Arizonans rejected Martha McSally’s toxic agenda and elected pro-equality champion Kyrsten Sinema to represent our state in the U.S. Senate,” said HRC Arizona State Director Justin Unga. “From her votes to gut critical health care protections, to kowtowing to Trump’s shameful ban on transgender service members — McSally has proven that she is more interested in political pandering than working to address the issues that matter to all Arizonans. We’re disappointed with this appointment.”

Rep. McSally has long opposed marriage equality and supported discriminatory, anti-LGBTQ policies and proposals while in Congress, including an amendment that would allow discrimination against LGBTQ people by taxpayer-funded organizations. She has refused to speak out against the Trump-Pence administration’s efforts to ban qualified transgender service members from the military and voted for an amendment to ban transition-related health care for service members and their families. She has also voted to raise healthcare premiums and roll back protections for 2.8 million Arizonans with pre-existing conditions, including many LGBTQ people.”

GLAAD noted how McSally’s anti-LGBTQ track record was in full view on election night and the voters of Arizona rejected her. Martha McSally supported an amendment to the U.S. Constitution that would ban same-sex marriage, opposed repealing the Defense of Marriage Act, voiced support for Donald Trump’s withdrawal of guidance on equal treatment of transgender students in public schools, lead the charge to an amendment to a defense spending bill that would have allowed federal agencies to discriminate against the LGBTQ community, opposed expanding anti-discrimination laws to cover sexual orientation and gender identity. 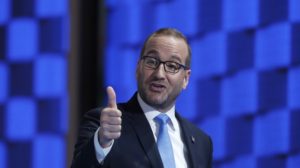