Although the previews of next week’s episode shows scenes with Monaghan, we are assuming that after the season finale, tha twill be it for Ian Gallagher.

Playing the sexy young top hung twink for 9 years has taken Monaghan to new heights in his career including his role as the Joker on FOX TV’s ‘Gotham‘ and slew of roles in both TV and Movies. 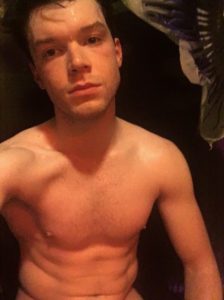 Monaghan has played Ian Gallagher, a gay bipolar teen who is the son in a large dysfunctional family in Chicago, when he was just 15-years old. He has literally grown up on the show.

‘I was very lucky to mature and grow with this show,’ said Monaghan in his statement. ‘Experiencing so many firsts, maturing as an actor, a professional, and a human. In the process gaining friends, family, and the best coworkers a very lucky actor could ask for, and for this I can be nothing but gracious.’

The 25 year-old actor won’t have much time to relax as he has five movies currently in production.

If that wasn’t enough depressing news, Cameron Monaghan uploaded two naked pics of himself at the sauna to lift up his fans spirit. He didn’t reveal his junk but we were able to locate the famous junk shots captured on Shameless.