According to the Florida Attorney General, gay hate crime cases based on sexual orientation currently account for 22 percent of all hate crimes, surpassing religion as the second highest category. Race is still the most common motivation. When taking into account the size of the targeted communities, LGBT Floridians are at the highest risk of being targeted with a hate crime.

When a bystander  identified by police as Helmut Muller Estrada, attempted to break up the attack he too fell victims to the suspects as he was too was beaten until he was knocked unconscious. Estrada awakened in a pool of his own blood.

According to police the four young men turned themselves in the following day after their faces were shown on news broadcasts and social media. At the time, authorities charged the four men with aggravated battery however now that the story went viral, prosecutors say that the four suspects will now be facing new charges of aggravated battery committed with prejudice.

According to police…”The four men called the victims “maricones,” an anti-gay slur in Spanish. Chalarca said he believes he and his boyfriend were attacked simply because of their sexuality.”

Rene Chalarca told ABC affiliate WPLG…”We were together So for me, it’s like, yes, it was a hate crime.” said Charlarca. With the new charges, the men each face up to 30 years behind bars. 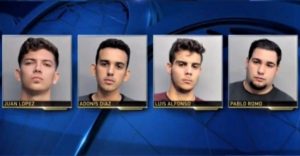