KANSAS — Republican lawmaker Kansas Rep. Steve Alford (R-Ulysses) is trying to take us back in time to the 1930s when Marijuana was promoted as the worse drug on the planet.

One of his reasons for his backwards thinking is that he believes that black people respond the worse to marijuana usage simply because of their “genetics”.

This wasn’t hearsay as the entire moment was captured on video during his attendance at a Legislative Coffee session on Saturday at St. Catherine Hospital in Garden City, Kansas this past Saturday.

“One of the reasons why–I hate to say it – the African Americans, they were basically users and they basically responded the worst off those drugs just because of their character makeup, their genetics and that. And so basically, what we’re trying to do is we’re trying to do a complete reverse with people not remembering what has happened in the past,” said Rep. Steve Alford (R-Ulysses).

The backlash was severe and prompted Rep. Steve Alford to apologize but only after he found out he was caught on video making those absurd comments.

“This past weekend I made comments at a town hall in Garden City, Kansas, regarding my opposition to the legalization of marijuana,” he said in a statement obtained by Law&Crime. “As an aside, I also remarked that one of the original reasons behind the criminalization of the drug in the 1930s was its negative effects on society and more specifically the damaging consequences on the African American community. I was wrong, I regret my comments, and I sincerely apologize to anyone whom I have hurt. Substance abuse is a blight on our society, and legalizing marijuana only opens the door to harder drugs. I have seen firsthand how drug abuse destroys lives, even within my own family, and I remain committed to fighting the spread of addiction in our state.” said Alford. 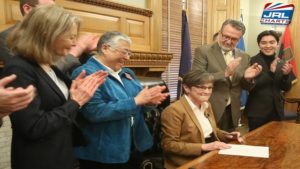