OHIO — Wes Goodman, 33, known as a conservative anti-gay state Republican representative known for his opposition against gay rights, has resigned from his state office position after he was literally caught with his pants down having gay sex in his state assembly office.

Wes Goodman, 33, confessed to the House Speaker that he engaged in consensual gay sex with another man in his office at the state house. This was Goodman’s first and last term in office who gained statewide fame for opposing gay rights.  He was also known for his comments of “Marriage is supposed to be between a man and a women. That’s the natural way of things.”

On his campaign website Goodman wrote: ‘Healthy, vibrant, thriving, values-driven families are the source of Ohio’s proud history and the key to Ohio’s future greatness. ‘The ideals of a loving father and mother, a committed natural marriage, and a caring community are well worth pursuing and protecting.’

How did Goodman get busted you ask….. The incident with him having sex with another man in his office took place several months ago at his Riffe Center office. The funny thing is that the man he engaged in sexual exploits with was not a member of his staff.

Goodman’s gay sex partner did not lodge a complaint over the matter but another person who said that they were a witness to the gay sexual encounter, was the one who exposed Goodman’s hypocrisy to Goodman’s Chief of Staff. Goodman has deleted his social media accounts over the rumors that had been spreading about his gay sex conduct.

Goodman said…‘We all bring our own struggles and our own trials into public life. That has been true for me, and I sincerely regret that my actions and choices have kept me from serving my constituents and our state in a way that reflects the best ideals of public service. For those whom I have let down, I’m sorry.’ said Goodman.

Republican House Speaker Clifford Rosenberger added that he had become aware fo the incident on Tuesday. ‘I met with him later in the day where he acknowledged and confirmed the allegations,’ Rosenberger said in a prepared statement. ‘It became clear that his resignation was the most appropriate course of action for him, his family, the constituents of the 87th House District and this institution.’ said Rosenberger. 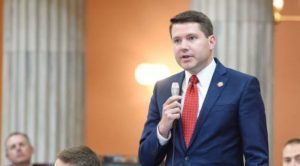