NEW YORK, NY — Diablo in Madrid (2017) from legendary director Bruce LaBruce and CockyBoys Entertainment, premiered their first gay erotica feature film from their one-of-kind collaboration on Halloween and judging by the still images and movie trailer of this blockbuster, CockyBoys’ Jake Jaxson and Bruce LaBruce have a major hit on their hands. 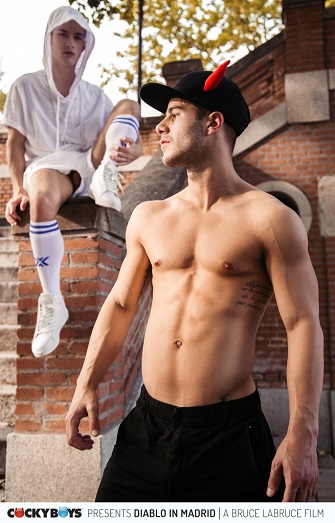 Jake Jaxson commented on working with Bruce LaBruce on Diablo In Madrid (2017)… “Working with Bruce on this anthology has been a dream come true. Bruce has been a huge inspiration to me, and his “take no prisoners” approach to filmmaking has greatly influenced my work, as he is constantly pushing past the boundaries imposed on gay culture and queer cinema. A few years ago we met at The Museum of Modern Art in New York, during a retrospective of his work, and at that time I was just a fan excited to see The Raspberry Reich. So, you can imagine my surprise when earlier this year, he suggested we might consider working together (thanks to Tayte Hanson for reintroducing us), and I was even more excited once I read the scripts he sent me. It was everything I have always loved in his work—irreverent, satirical, funny, and sexy—so wrong that it was right. And once we added our performers to the mix, I was all in.” said Jaxson. 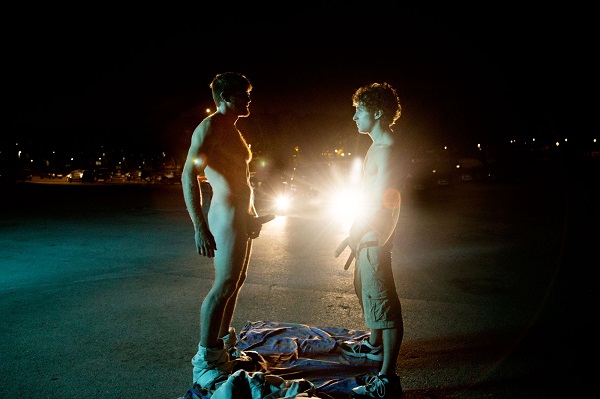 Synopsis:
“Diablo in Madrid begins with demon Allen King crawling out of an open tomb and making irreverent mischief on the hallowed grounds of a Madrid cemetery. He defiles graves, sexually teases a young mourner lured by his temptation, and struts about the cemetery, pitchfork in hand. Allen turns his wicked intentions to Colby Keller in an intense oral scene before he mocks another mourner and makes the grieving guy give him a blowjob. Eventually angel Sean Ford intervenes and attempts to stop diablo from doing anymore damage to the cemetery and its mourners. The diablo’s lust for the angel is strong and intense and at one point he tries to kiss him as they wrestle and fight from the cemetery, to the city streets, and into an occupied apartment. The angel Sean Ford keeps struggling until Allen eventually breaks down all of his walls and the two deliver a 5-star sex scene where we see Allen topping Sean and creating sexual magic in this unforgettable pairing between two of CockyBoys’ finest. The diablo Allen and the angel Sean soon embark on a journey together..but which of them is more transformed by the experience?”

Diablo In Madrid (2017) is the first big budget gay erotica release in an anthology of films that Bruce LaBruce will be releasing with CockyBoys. 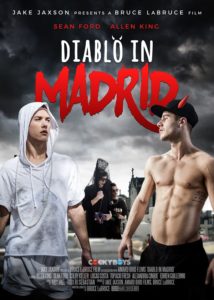 Retailers you will not want to hesitate in placing your pre-orders on this phenomenal blockbuster.  Contact Hugo at Media Partners LLC at 888-625-5788 | EMAIL 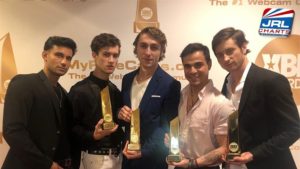